Inside story: Exploring the bespoke interior of Blue Jeans

Blue Jeans has been the most complex and detailed interior project that Van der Valk has undertaken to date. This incredible – and incredibly bespoke – interior seamlessly blends a wide variety of materials in a consistent design created by Guido de Groot and his team. With the owners giving us free rein to create something truly special, everyone involved has gone metaphorically the extra mile in terms of creativity – and literally in order to source the superb marbles, metals, woods, furniture and more required for a one-off 33-metre superyacht that sets a new benchmark in her size for excellence.

From the outset the interior concept for Blue Jeans revolved around having significantly higher-than-average ceilings throughout the main deck. This was a key element for the owners as they set about building a fully custom boat, with ceiling heights of no less than 2.50 metres in the main saloon. The sleek exterior profile superbly accommodates this request along with the tall flybridge and raised bow. High speeds were also on the early agenda so the large engine room required was another factor to influence the interior layout from the get-go.

Two other parameters taken into account when designing the interior were its multi-functional use and the desire for a fusion of Northern European and Asian styles. “That aside we had carte blanche to develop an interior based on the preferences of several generations of the owner’s family,” says designer Guido de Groot. “They challenged us to surprise them with our ideas, constantly pushing us to go a step further as we explored custom solutions. It was great fun to work with such adventurous clients… On various occasions we offered a range of different options, keeping the most radical until last, and that was what they would go for.

“This project was therefore exceptionally elaborate when it came to sourcing the materials needed to transform design proposals into construction elements while also reaching the quality level desired by the owners and the yard. A core ethos throughout the interior is the way the design lets the natural materials do the work – if we use metal that’s what it should look like, ditto with the distinctive use of wood and smart selection of marbles. The craftsmen have been tested to the limit and we’re delighted with the result.”

Van der Valk general manager Bram Kooltjes agrees and gives a glimpse into the intricate work involved. “Various walls, light elements and furniture accents are made of copper, which was quite a challenge as this metal corrodes in a maritime environment. We had to use a special clear-coat paint for protection although we couldn’t use a primer as this would have obscured the exquisite patterns in the metal. The use of liquid metal for some of the other walls was a new one for us too: we had to create bespoke MDF panels of a very specific size onto which the alloy was poured and transformed into a pattern prior to solidification.”

A defining feature of the overall design is the way reconstituted teak is used in small wooden strips for the walls and ceilings. “This woodwork was an immense job for our carpenters,” says Bram. “It demanded far more time than normal as well as some meticulous joinery skills. It is a fine example of how the owners refused to compromise on costs once they had been inspired by Guido to take on a particular idea.” Other woods featured on Blue Jeans include floor planks made of American walnut and furniture accents in smoked dark oak.

Incidentally, the wooden slats had another function in the main salon by improving the acoustics on what is a very quiet boat despite her powerful engines. “We had to take into account that virtually the entire saloon is made of wood with glass on three of the four sides,” adds Bram. “The sound and vibration from entertainment facilities like the karaoke set and booming AV system all had to be attenuated. In-between the wooden trims in the ceiling we placed eight-millimetre sound-absorbing felt which looks like black strips of wood. Unlike in a music studio ashore, this material needs to be cleanable in a salty and often humid marine environment so this maintenance aspect too has been catered for.”

Further insulation comes from the floor, which is comprised of a sandwich panel featuring aluminium sheets, rubber and honeycomb glued onto the structure, with the ribs also insulated with dampening materials. On top of all this, underfloor heating and then the parquet floor itself.

A mention too for the magnificent marbles found on Blue Jeans. The owners were keen to find something rare in blue and this led the design team to the south of Brazil for the Lapis Lazuli Blue used for the master bathroom walls and sinks. Other superb stones tracked down include Nero Marquina and Fior di Bosco for the dining area and the wonderful White Carrara used in the saloon entrance floor, walls, cabinets and ceiling, as well as the guest bathrooms.

The interior also features wall panels made of natural grey leather and vintage brown leather in the furniture. Along with the tailor-made wool carpets, all these materials reflect the owners’ tastes in terms of looks and the anticipated use by different age groups. The main saloon takes this versatile approach to the next level. All the sofas – made in partnership with the Italian company Poltrona Frau can be rearranged into three different lounge seating groups or be removed altogether to create a vibrant dance floor.

The impressive bar, buffet and wine cabinet arrangement will serve any occasion, while the large dining area forward features a capstan table that seats eight for dining in style and can double in size to accommodate a large party for card playing. Sourced from Fletcher in the UK, this table is a standout element in its own right bathed with natural light from four windows and overlooked by a beautiful bespoke chandelier.

There are some more lovely light features integrated into the walls of this main deck social hub, another excellent example of the degree of one-off customisation involved in Blue Jeans, right down to finding the exact size of LED strips to fit into the pockets. The     engineers have also excelled themselves with the side doors that reveal hydraulic balconies to port and starboard for instant diving access to the sea. Incidentally, the owners insisted on having a flush side deck when the balconies are open so the cylinders have been carefully incorporated into the lower deck.

Access to the accommodations below is via a spectacular staircase, continuing the elegant wooden slats used in the main saloon ceiling down into the walls of the stairwell. A showpiece chandelier here reinforces the architectural nature of the interior and its myriad custom components.

The full beam owners’ stateroom amidships has a large bathroom plus a walk-in wardrobe. As befits the status of the space, the sumptuous use of materials continues here, with even the metal grids used for the air-conditioning becoming an integral and highly attractive part of the design. Blue Jeans also has two VIP suites, one twin cabin and quality berths for four crew members.

The lower deck layout is made flexible for those times when not everyone onboard is staying the night. In addition to the shower in the main deck head, day guests can also access the starboard VIP cabin’s extra-large bathroom without intruding on the suite itself thanks to a clever system of sliding doors in the hall. This set-up is another part of the multifunctional and multigenerational concept that underpins Blue Jeans, making her equally ideal for large groups on day trips as well as weekend cruises and extended stays onboard.

All these interior principles apply equally to the al fresco entertainment areas too, which again features a wealth of options to suit different seating groups and functions. The sofas on the aft deck rotate to face inwards or out to sea while a shaded al fresco dining area on the sun deck includes a bar and retractable diving board integrated into the port bulwark. The bow area on the main deck has an extra chill-out zone with a pop-up table that recedes into the deck. When raised, guests can sit with their legs inside the vacated space; when lowered, the flush deck can easily be transformed into a dance floor. Placing the anchor winches in a special compartment below the deck and the capstans in a side pedestal ensures a clean foredeck at all times.

Last but not least, the unrivalled attention paid to stylish material use is extended to the outdoor areas too. The wooden trims that are so prominent in the interior come back in the sofa on the flybridge aft, in the dining table and on the bar. Exterior ceiling panels have been given a smoky grey effect that resembles painted marble while items such as the speakers are painted high gloss silver to match the metallic grey superstructure. Even the davit crane has been painted to suit the overall palette, ensuring that there no white colour is to be seen on Blue Jeans. 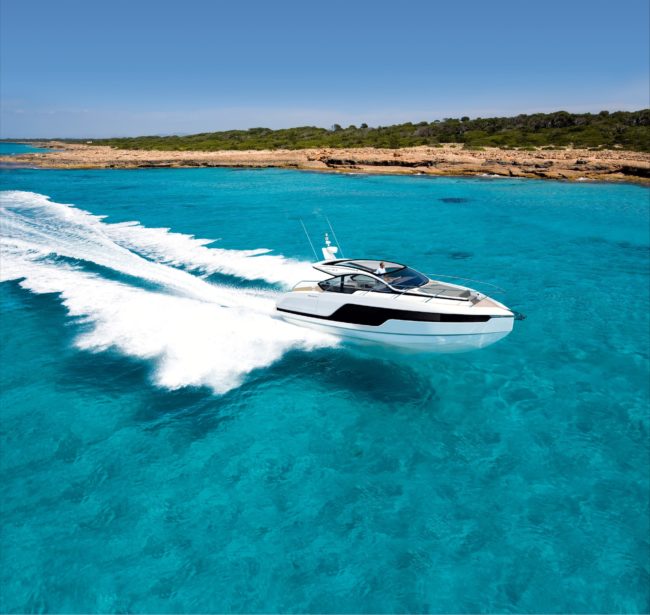 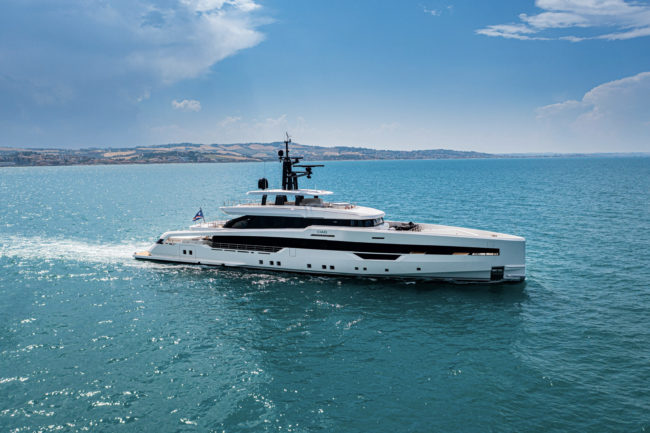 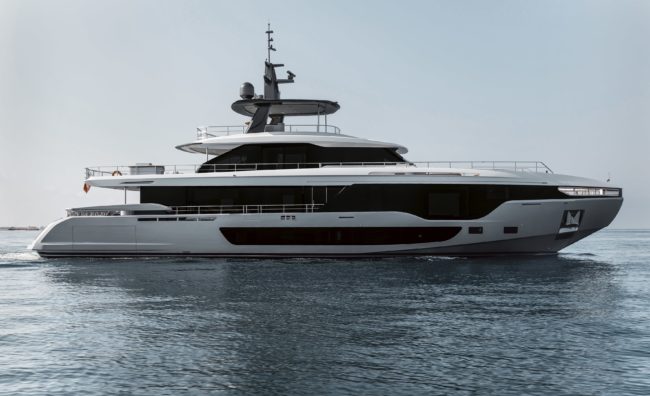 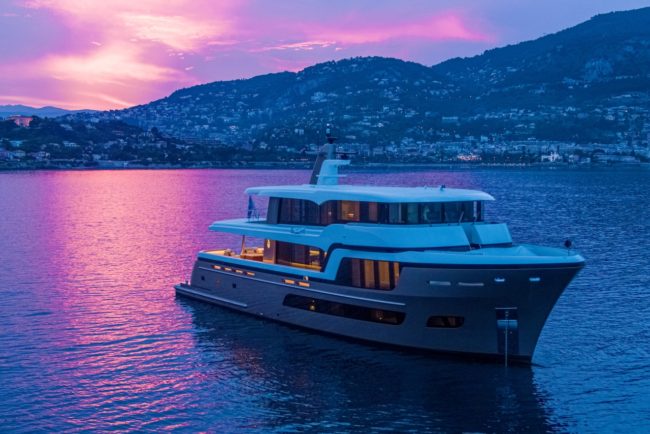 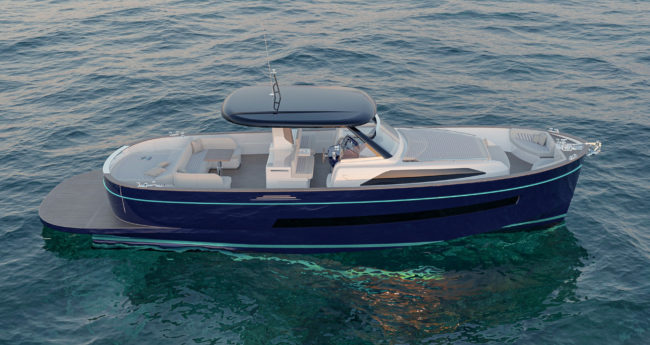 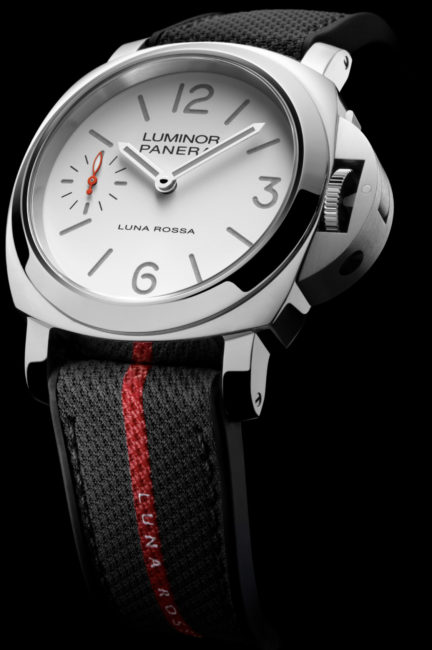